Triglycerides are a type of fat found in your blood.

After you eat, your body converts calories you don’t need into triglycerides and stores them in fat cells to be used for energy later.

While triglycerides are an important energy supply for your body, too many triglycerides in your blood can increase your risk of heart disease.

About 25 percent of adults in Europe have elevated triglycerides in their blood, which is classified as triglyceride levels above 150 mg/dL.

Obesity, uncontrolled diabetes, regular alcohol use and a high-calorie diet can contribute to high levels of triglycerides in the blood. 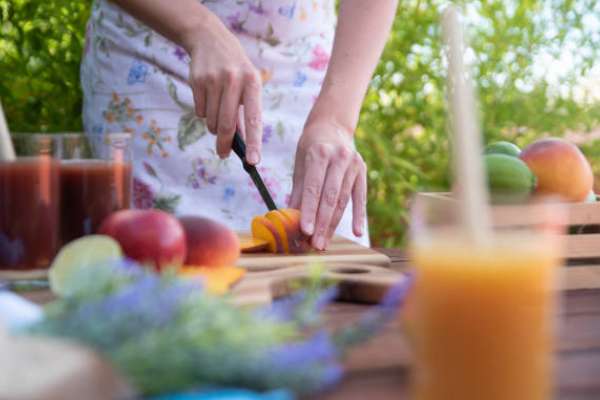 Read below for 13 ways to reduce triglycerides in the blood naturally.

How to reduce triglycerides naturally

1. Strive for a healthy body weight

Whenever you eat more calories than your body needs, your body converts those calories into triglycerides and stores them in fat cells.

Working on a moderate body weight by consuming fewer calories can be an effective way to reduce blood triglyceride levels.

In fact, research has shown that losing even a modest 5-10% of your body weight can significantly reduce triglyceride levels.

While the goal is to keep weight loss in the long term, some studies have shown that losing weight can have a lasting effect on blood triglyceride levels, even if you regain some of the weight.

One older study focused on participants who dropped out of weight management programs. Although they had regained the weight they had lost 9 months before, their blood triglyceride levels remained 24-26% lower.

Added sugar is a big part of many people’s diets.

Although it is not recommended to consume more than 10% of daily calories in added sugar per day, studies show that the average European consumes about 14-17% per day.

Excess sugar in your diet can turn into triglycerides, which can lead to an increase in blood triglyceride levels, along with other heart disease risk factors.

Another study found that consuming large amounts of added sugar was also associated with higher blood triglyceride levels in children.

Fortunately, several studies have shown that a low-carb diet can lead to a decrease in blood triglyceride levels.

Even a simple change, such as replacing drinks sweetened with sugar with water, could reduce triglycerides in some people.

Much like added sugar, the extra calories from carbohydrates in your diet are converted into triglycerides and stored in fat cells.

Not surprisingly, low-carb diets are associated with lower levels of triglycerides in the blood.

One study looked at how different carbohydrate intakes affect triglycerides.

Another review reported that carbohydrate-free diets were more effective at reducing triglyceride levels than low-fat diets with the same amount of calories.

Fiber is naturally found in fruits, vegetables and whole grains. They are also found in many other plant sources, including walnuts, seeds, grains, and legumes.

Including fiber-rich foods in your diet can slow the absorption of fat and sugar in your small intestine, helping to reduce the amount of triglycerides in your blood.

According to one study of overweight or obese people, consuming more dietary fiber was associated with lower triglyceride levels.

Another small study in adolescents found that eating fiber-rich cereals with a high-fat breakfast reduced the increase in triglyceride levels after eating by 50%.

Aerobic exercise can increase the amount of good (HDL) cholesterol in the blood, which can reduce triglyceride levels.

At least 30 minutes of aerobic exercise is recommended 5 days a week, which may include activities like walking, running, cycling and swimming.

The benefits of exercise on triglycerides are most evident in long-term exercise regimens. One study in people with heart disease found that exercising for 45 minutes 5 times a week led to a significant drop in blood triglycerides.

Other studies have found that exercising with a higher intensity for a shorter period of time is more effective than moderate-intensity exercise for longer.

Artificial trans fats are a type of fat that is added to processed foods to extend their shelf life.

Trans fats are commonly found in commercially fried foods and pastries made with partially hydrogenated oils. They can also be found naturally in small quantities in some animal products.

Due to their inflammatory properties, trans fats have been attributed to many health problems, including increased levels of LDL (bad) cholesterol and heart disease.

One study reported that replacing trans fats with polyunsaturated fats in the diet could be effective for reducing triglyceride levels.

Oily fish is known for its heart health benefits and its ability to lower blood triglycerides.

This is mainly due to the content of omega-3 fatty acids, a type of polyunsaturated fatty acids that is considered essential, which means that you have to ingest it through your diet.

It is recommended to eat two servings of fatty fish per week to reduce the risk of heart disease and stroke.

Moreover, one study found that eating salmon twice a week significantly reduced the concentration of triglycerides in the blood.

Salmon, herring, sardines, tuna and mackerel are some of the species of fish that have a particularly high content of omega-3 fatty acids.

8. Increase your intake of unsaturated fats

Studies show that monounsaturated and polyunsaturated fats can reduce triglyceride levels in the blood, especially when replacing carbohydrates in your diet.

Another review of several studies reported that olive oil could significantly reduce levels of triglycerides, total cholesterol and LDL (bad) cholesterol compared to other types of vegetable oil.

To maximize the benefits of unsaturated triglyceride-lowering fats, choose heart-healthy fats like olive oil and use them to replace other types of fats in your diet, such as trans fats or highly processed vegetable oils.

Insulin resistance is another factor that can contribute to high levels of triglycerides in the blood.

After you eat a meal, your pancreatic cells send a signal to release insulin into the bloodstream. Insulin is then responsible for transporting sugar to your cells that will be used for energy.

If you have too much insulin in your blood, your body can become resistant to it, making it difficult to use insulin effectively. This can lead to the accumulation of sugar and triglycerides in the blood.

Fortunately, setting a regular diet can prevent insulin resistance and high triglycerides. For example, a growing body of research shows that skipping breakfast can lead to reduced insulin sensitivity.

However, the evidence is different as far as the frequency of meals is concerned. Studies show that eating three meals a day significantly reduced triglycerides compared to six meals a day.

No matter how many meals you eat per day, regular meals can improve insulin sensitivity and reduce blood triglyceride levels.

Alcoholic beverages often contain a lot of sugar, carbohydrates and calories. If these calories remain unused, they can be converted into triglycerides and stored in fat cells.

In addition, alcohol can increase the synthesis of large lipoproteins of very low density in the liver, which transmit triglycerides to your system.

Although various factors come into account, some research shows that moderate alcohol consumption can increase triglycerides in the blood up to 53%, even if your triglyceride levels are initially normal.

However, other studies linked light and moderate alcohol consumption to a reduced risk of heart disease, while overeating was associated with an increased risk.

11. Add soy protein to your diet

Soybeans are rich in isoflavones, which are a type of plant compounds with numerous health benefits.

Although widely known for its role in lowering LDL (bad) cholesterol, soy protein has been shown to reduce blood triglyceride levels.

Soy protein can be found in foods such as soy beans (edamame), tofu, tempeh and soy milk.

Nuts provide a concentrated dose of fiber, omega-3 fatty acids and unsaturated fats, all of which together work to lower triglycerides in the blood.

One study found that each daily serving of walnuts reduced triglycerides by an average of 2.2 mg/dL (0.02 mmol/L).

Another review had similar findings, which showed that eating nuts was associated with a decrease in triglycerides in the blood.

But keep in mind that nuts are high-calorie. One serving of almonds, or about 23 almonds, contains 164 calories, so moderation is key.

Most studies found the greatest health benefit in individuals who consumed between 3 and 7 servings of walnuts per week.

13. Ask your doctor about natural supplements

Several natural dietary supplements could have the potential to lower triglycerides in the blood. Always talk to your doctor before you start taking any supplements as they may work with other medications.

Especially note that food and drug agencies do not regulate dietary supplements, and the quality of supplements can vary greatly.

Below are a few of the main supplements that have been studied:

Diet and lifestyle factors can have a major impact on triglyceride levels.

With a few simple lifestyle changes, you can reduce triglycerides and improve overall health at the same time.

There is no need to completely change your diet and lifestyle overnight.

Try experimenting with a few of the above tips and gradually incorporate other strategies into your routine over time to make longer-lasting, sustainable changes that are easier to adhere to.